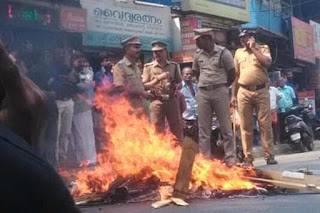 The Kerala unit of the Shiva Senahas called for a statewide strike on October 1 against the Supreme Court’s verdict to allow women of all ages to enter the SabarimalaTemple. Saying that the age-old traditions at the hill shrine should be protected, the Uddhav Thackeray-led party announced the call for a hartal on Monday.
The Sabarimala Karma Samithi has called for a dawn-to-dusk hartal in protest against the entry of two women below the 50 years of age into Sabarimala shrine on Thursday. The samiti functionaries exhorted to shut down the shops and keep vehicles off the road in solidarity towards the protest. They also urged Chief Minister Pinarayi Vijayan to apologize before the Hindus and step down from the post. The hartal will be held from 6 am to 6pm.
Protesters opposing the Supreme Court order allowing the entry of women of menstrual age group into the shrine turned violent at Nilackal and clashed Wednesday and the police resorted to baton-charge.
Antharashtriya Hindu Parishad led by Parvin Togadia has also called for a hartal demanding that the CPI-M led LDF government promulgate a law to get around the apex court verdict.
Post Views: 160