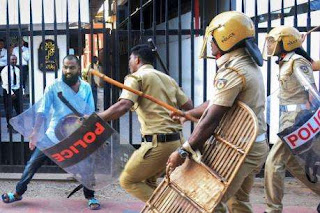 Palakkad: The Sabarimala Women’s Declaration on Monday issued a banning proposal at the Manjeswaram Taluk on the occasion of the hartal. The district collector informed the matter. Declaring the Crpc144 prohibition the next 24 hours.
EXCLUSIVE- Before and after the Sabarimala Darshan, the pin and the Kanakadurga stood on the lodge in Kudak
The collector’s order said that an unjust group would be banned from joining and acting out violent acts. All the schools, including professional colleges in Manjeswaram ceiling will be closed on Friday, as the ban was announced.
In the Manjeshwaram taluk the next 24 hours, the Crpc144 prohibits the prohibition of prohibitory orders under the Crpc144 prohibition order .They are ordered to prohibit the joining and immediate repression of violence. All schools, including professional colleges in the Manjeswaram range, will be on leave tomorrow.
Dr. Sajith Babu IAS
District Magistrate &
District Collector
Kasaragod
03/01/2019
11.10pm
Post Views: 41